Familial adenomatous polyposis (FAP) results in the formation of thousands of adenomatous polyps in the colon and rectum early in life, and if left untreated, inevitable progression to colorectal cancer by age 40–50 years due to nearly 100% disease penetrance (1-3). Given the high risk of colorectal malignancy associated with FAP, management protocols suggest that screening should begin around ages 10–14 years (1-3). Once polyposis is identified, prophylactic colectomy or proctocolectomy is generally recommended, with the timing and type of surgery dependent upon disease severity, patient age, and psychosocial factors (2).

The most common surgical procedures for the management of FAP include total abdominal colectomy with ileorectal anastomosis, restorative proctocolectomy with ileal pouch-anal anastomosis, and total proctocolectomy with end ileostomy (4-6). Restorative proctocolectomy with ileal pouch-anal anastomosis has become the mainstay of surgical management, and a laparoscopic approach has gained significant support in recent years (2,4,5,7,8). Jacobs et al. initially described laparoscopic colectomy in 1991, while the first prophylactic laparoscopic ileorectal anastomosis for FAP was reported in 1997 by Milsom et al. (6). Many studies have since compared laparoscopic versus conventional open ileal pouch-anal anastomosis and ileorectal anastomosis to determine the feasibility of laparoscopy in the setting of prophylactic surgery for the management of FAP (2-7,9-14). In comparison to an open approach, benefits of laparoscopic surgery may include shorter length of stay (3,4,10,11,13,14), less need for intra-operative blood transfusion (5,6,8,14), lower rate of desmoid tumors post-operatively (3,9) decreased incidence of post-operative superficial surgical site infection (3,7,10), and a lower rate of minor, short-term complications (4,7,11,13) with no increase in major, long-term complications (11). However, many of these analyses included adult patients, cohorts consisting of both patients with FAP and ulcerative colitis, and/or were small single-institution studies and are thus not widely generalizable to the pediatric patient population.

While evidence supports that a laparoscopic approach for elective, prophylactic treatment of FAP in pediatric patients is at least as safe as open technique, the data regarding possible advantages of a minimally invasive approach remain limited (2,3,4-6,8,11,13,14). Alternatively, operative duration has consistently been found to be longer with a laparoscopic approach, which is reportedly associated with higher overall costs (4,7,8,13,14). Further investigation is needed to determine if the outcomes following laparoscopic surgery provide an advantage significant enough to justify the potential increased costs of the procedure for this patient population. Therefore, this study aims to evaluate the clinical outcomes and resource utilization associated with open versus laparoscopic surgery for prophylactic total abdominal colectomy and proctocolectomy in pediatrics patients with FAP. We hypothesized that laparoscopic surgery is associated with improved short-term outcomes and similar hospital resource utilization. We present the following article in accordance with the STROBE reporting checklist (available at http://dx.doi.org/10.21037/tgh-20-190).

Nationwide data on U.S. children with FAP that underwent colectomy in the years 2009 and 2012 were obtained from the Agency for Healthcare Research and Quality (AHRQ)-sponsored Healthcare Cost and Utilization Project (HCUP) Kids’ Inpatient Database (KID). The KID is the largest publicly available all-payer pediatric inpatient care database in the U.S. and is released on a three-year cycle. It contains data from approximately 3 million pediatric discharges each year across 44 different states and is weighted for national estimates of over 7 million hospitalizations. Therefore, the KID is a powerful tool to analyze national trends in healthcare utilization, access, charges, quality, and outcomes for both common and rare pediatric conditions (15).

Children (age ≤20 years) with a diagnosis of FAP were identified in the KID by the International Classification of Disease, Ninth Revision (ICD-9) diagnosis codes 211.3 and 211.4. Patients who underwent an operation for total abdominal colectomy were identified by the Current Procedural Terminology (CPT) codes 45.81 and 45.82, which differentiate between procedures performed by an open or laparoscopic approach. Cases containing both of these CPT codes were excluded. Simultaneous proctectomy and/or creation of an ileostomy were determined using the following secondary CPT codes: 45.92, 45.93, 45.95, 46.20, 46.21, 46.23, 48.40, 48.42, 48.43, 48.49, 48.50, 48.51, 48.52, 48.63, 48.69. In order to identify those children undergoing prophylactic surgery, we excluded patients that underwent surgery during non-elective admissions as well as patients with a concurrent diagnosis code for colorectal malignancy.

The patient demographics, concurrent diagnoses, length of stay, treating hospital characteristics, and total hospital charges were compared. Categorical variables were compared using a chi-squared test, and continuous variables with nonparametric distributions were compared using the Mann-Whitney test. Significance was set at P<0.05. Results were weighted for national estimates according to HCUP standards based upon treating hospital characteristics and patient factors (15). The study was conducted in accordance with the Declaration of Helsinki (as revised in 2013). The Institutional Review Board of the University of Miami waived the requirement for approval of this study since the KID contains de-identified, publicly available data and is not considered human subjects research. Statistical analyses were performed using SPSS Statistics version 24, IBM Corporation, Armonk, New York.

Overall, we identified 256 patients with FAP that underwent total abdominal colectomy. We excluded 33 patients that underwent surgery during non-elective admissions and 7 patients that carried a diagnosis of malignancy. Of the remaining 216 patients, 95 underwent open colectomy and 121 underwent laparoscopic colectomy (Table 1). The median age was similar (16 years) for both groups, and sex did not differ significantly between the two groups. Additionally, there were no differences in the household income levels or primary payer status for these patients. In both groups, the majority of patients were treated at large, not-for-profit, urban teaching hospitals. 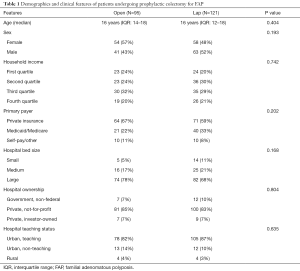 We employed this large administrative data set to characterize the surgical management surrounding a rare condition among children. Whereas prior studies have been limited by single-institution experiences and substantial heterogeneity with regard to the patients included, the current study focuses on the outcomes of pediatric patients undergoing prophylactic surgery to mitigate the risks of colorectal malignancy associated with FAP. By excluding patients that underwent procedures during non-elective admissions as well as those diagnosed with colorectal malignancy, our methodology ensures that the study population includes only those children undergoing planned, prophylactic surgical resections in an effort to truly compare open and laparoscopic techniques for this specific indication.

In our current study, the overall rates of postoperative complications are quite low for both open and laparoscopic approaches in comparison to prior studies evaluating the outcomes between open and laparoscopic total colectomy and proctocolectomy. This difference may be, at least in part, due to the exclusion of patients with ulcerative colitis or Crohn’s disease as many of those patients require immunosuppressive medical treatments, which have been shown to correlate with increased rates of complications in patients undergoing these procedures (11,16,17). Furthermore, the patients in our study are less likely to have comorbid conditions given that our study does not include older patients. Lastly, we excluded any patients undergoing procedures during non-elective admissions and those with a diagnosis of malignancy given that those patients could have potentially required urgent surgery under less than optimal conditions due to obstructive symptoms or bleeding.

We did not include the most recent release of the KID (year 2016) due to the complexities in mixing ICD-9 and ICD-10 data. Our data from 2009 and 2012 predate the widespread implementation of enhanced recovery after surgery (ERAS) protocols over recent years, which have aimed to improve postoperative pain, decrease length of stay, and reduce costs. It is therefore very possible that the increasingly common utilization of standardized perioperative protocols for patients undergoing minimally invasive colorectal surgery may yield demonstrable differences in length of stay between laparoscopic and open approaches. Although we did not appreciate substantial differences in our study, we suspect that future data will demonstrate shorter length of stay, and therefore reduced costs, associated with minimally invasive surgery for children with FAP.

An unexpected finding in this study is the predilection for total colectomy over proctocolectomy among the patients that underwent laparoscopic surgery. While controversy remains regarding the necessity and timing of removing the rectum for FAP, it is unclear why the decision to pursue a minimally invasive approach would influence the extent of the upfront surgical resection. One possible explanation is that this group could have simply included more patients with limited polyposis of the rectum for which total abdominal colectomy with subsequent endoscopic management of the rectum is feasible. For such patients, avoidance of proctectomy is recommended when possible to avoid the increased morbidity associated with pelvic surgery in young patients, specifically with regard to fertility and bowel function. On the other hand, it is possible that this difference is secondary to patient selection by the surgeon. Some surgeons may lack the training and technical skills required to safely perform the pelvic dissection laparoscopically and therefore only offer open surgery to those patients requiring total proctocolectomy while reserving laparoscopic surgery for those requiring resection of the colon and not the rectum. Although it is difficult to determine the true cause for this variance in rectal resection rates in our study, we attribute the higher rate of ileostomy creation in the open surgery cohort to the similarly elevated rate of simultaneous proctectomy performed among this group given that most surgeons create a temporary diverting ileostomy at the time of performing restorative proctocolectomy.

Several limitations are inherent to our study due to the nature of utilizing a retrospectively collected administrative database such as KID. Among them are possible errors in data sampling, collection measures, usage of the ICD-9 coding scheme, and administrative errors during data entry. Additionally, although this is the largest study if its kind for this rare pediatric condition, our analysis captures data for only 216 patients. Therefore, it is possible that type II error may be present in which we did not detect differences that may actually exist. Another major limitation is the lack of data regarding long-term outcomes. Prophylactic colectomy for FAP, whether done in an open or laparoscopic fashion, is performed with the ultimate goal of improving long-term survival by preventing colorectal malignancy. However, since KID is collected from single hospital admissions without follow-up information, our study is unable to compare the oncologic outcomes for patients undergoing these prophylactic procedures. Additionally, we are unable to measure other relevant short-term outcomes beyond hospital discharge such as unplanned hospital readmissions. While the utilization of any administrative inpatient dataset is clearly limited by a lack of granular detail and measures of long-term outcomes, this study provides the largest multi-institutional analysis to date comparing open and laparoscopic techniques for the prophylactic surgical treatment of pediatric patients with FAP.

Our findings suggest that a laparoscopic approach for prophylactic colon resections can be safely performed in children with FAP and that hospital resource utilization is equivalent compared to conventional open surgery. However, total abdominal colectomy is more commonly performed instead of total proctocolectomy when a laparoscopic approach is utilized. The long-term impact of forgoing resection of the rectum remains to be determined for children with FAP.

Provenance and Peer Review: This article was commissioned by the editorial office, Translational Gastroenterology and Hepatology for the series “Current Topics in Pediatric General Surgery”. The article has undergone external peer review.

Reporting Checklist: The authors have completed the STROBE reporting checklist. Available at http://dx.doi.org/10.21037/tgh-20-190

Ethical Statement: The authors are accountable for all aspects of the work in ensuring that questions related to the accuracy or integrity of any part of the work are appropriately investigated and resolved. The study was conducted in accordance with the Declaration of Helsinki (as revised in 2013). The Institutional Review Board of the University of Miami waived the requirement for approval of this study since the KID contains de-identified, publicly available data and is not considered human subjects research.