Achalasia is a pathological condition causing dysphagia, reflux, and regurgitation. The hallmarks of diagnosis include esophageal dysmotility and lack of relaxation of the lower esophageal sphincter (LES). While the condition was described by Sir Thomas Willis in 1672, the term “achalasia” was first published in 1929 (1,2). Its primary pathophysiology is thought to be related to the loss of ganglion cells in the distal esophageal segment, causing a dysmotility resulting in LES dysfunction (2,3). Left untreated, the sequelae can be significant, as the proximal esophageal tissue becomes more compliant as a compensatory measure and entirely non-functional by end-stage disease (3).

Heller performed the first esophagocardiomyotomy in 1913 (2,4). Since then, endoscopic therapies have become available, primarily as an initial or non-surgical trial (5). The minimally invasive approach of the Heller myotomy for adults was described in 1993 by Jorgensen et al. and has since shortened recovery, decreased complications, and improved availability of the procedure compared to its open counterpart (6,7). Most recently, the peroral endoscopic myotomy (POEM) was introduced in 2010, which revolutionized the treatment of this condition, providing a viable alternative using a natural orifice approach (5,8).

For the pediatric population, major series of patients being treated for achalasia date back to 1983 (9). As with many pediatric surgical procedures, the introduction of diagnostic and therapeutic modalities has paralleled that for adults, including minimally invasive and endoscopic procedures (2,5,7). New developments, such as advanced esophageal manometry and intraoperative measurement capabilities, can now demonstrate real-time feedback of the effectiveness of the procedure (10).

Achalasia generally has an insidious onset, with many subclinical features preceding definitive diagnosis. This course is especially true for many children, for whom the diagnosis is made on average at approximately 7 years of age (11). Many patients (46%) are diagnosed with gastroesophageal reflux disease and treated as such, often for years, prior to a conclusive diagnosis of achalasia (11). A standard evaluation for patients presenting with symptoms consistent with achalasia include endoscopy, an upper gastrointestinal series, and esophageal manometry. A representative upper gastrointestinal series is shown in Figure 1. Whereas the latter two evaluations will often clearly establish the diagnosis, endoscopy will identify reflux related strictures or other esophageal pathology. High-resolution esophageal manometry has significantly improved diagnostic capability, especially when a standardized protocol of pressure parameters is used (12,13). Preoperative manometry readings are demonstrated in Figure 2. 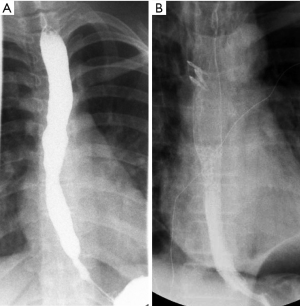 Once the diagnosis is established, the severity of the disease can be quantified objectively. The Eckardt score was developed to catalogue the symptoms of achalasia (14). The scoring system ranges from 0 to 12, attributing points to four symptoms: dysphagia, regurgitation, chest pain, and weight loss. Comparisons of post-procedural Eckardt scores have been used to evaluate differences between treatment modalities (15,16). A normal Eckardt score is considered to be £3.

Endoscopic interventions for achalasia include endoscopic balloon dilations of the narrowed channel of the sphincter mechanism or direct botulinum toxin injections into the sphincter muscle to relax it. Pneumatic dilation of the LES is an accepted initial treatment modality, particularly for patients who are not optimal surgical candidates, although this rarely applies to children. This procedure has been available as an alternative to surgical intervention for decades, with outcomes in children reported as early as 1983 (9). A relatively low complication rate and wide availability makes this treatment modality attractive as an initial therapy for patients (5). The primary disadvantage however, is that multiple dilations are required for successful relief in about 90% of patients and long-term results have been inferior to surgical myotomy (5).

Injections of botulinum toxin into the LES directly are another option, especially for children who are poor candidates for repeated pneumatic dilation or surgical intervention (5,17). The toxin serves to provide relaxation of the LES and is also associated with minimal complications (17). A proven dosing and injection frequency protocols have not been established in the pediatric population (5). Approximately half of patients undergoing this injection require an additional procedure within 7 months (17). In addition, long-term results have also been inferior to surgical myotomy, primarily due to the need for repeated injections for maintenance.

Heller initially described the esophagocardiomyotomy for achalasia in 1913 (4). Berquist et al. first described a series of pediatric patients in 1983, contrasting the effectiveness of pneumatic dilations and Heller myotomy (9). The laparoscopic Heller myotomy (LHM) in children was then published by Holcomb et al. in 1996, in which two pediatric patients were treated successfully (7). Multiple investigations since have demonstrated that LHM is a safe and effective procedure, with the primary benefit of providing a definitive therapy for achalasia (18-23). In comparison to the equivalent open procedure, this approach allows for decreased pain, shorter length of stay, and earlier return to normal activity (22). As a result, LHM has become the standard surgical therapy in children (5). Major steps of the LHM are shown in Figure 3.

Figure 3 Laparoscopic Heller myotomy. (A) At the start of the case, exposure of the phrenoesophageal ligament is performed using a Nathanson liver retractor. The phrenogastric and gastrohepatic ligaments are incised. (B) A myotomy is performed through the longitudinal and circular fibers. (C) A complete myotomy is carried 3 cm caudal to the gastroesophageal junction and 6 cm on the esophagus.

The use of fundoplication has been a point of controversy among adult general surgeons performing LHM (5). Most commonly, a Dor, Toupet, or Nissen fundoplication is performed in children in order to provide anti-reflux benefits (24). According to an International Pediatric Endosurgery Group (IPEG) survey published in 2016, most pediatric surgeons (95%) tend to perform an anti-reflux procedure at the time of LHM (24). This figure is similar to the case in adults, for whom surgeons perform fundoplications in 86% (2,25). In our own experience with 37 patients who underwent LHM from ages 9 months to 19 years (mean 12.9 years), we performed Dor fundoplication in 73% of patients. Patients not receiving a fundoplication (27%) tended to be younger and more recent cases in our experience.

The advent of intraoperative manometry during LHM allowed for the improvement of success rates in treating pediatric achalasia. This technique was described for children undergoing LHM in 2008 by Jafri et al., with the advantage of real-time feedback on the adequacy and overall effectiveness of the myotomy (26). With pre- and post-operative measurements of LES pressure, the recurrence of symptoms following LHM were found to be decreased compared to those that did not have intraoperative monitoring (26). As an additional measure to evaluate for the completion of myotomy, we perform an upper endoscopy before and after the procedure to note the difference in caliber at the LES. If manometry is not available at a particular institution, some authors have suggested that endoscopy alone may be substituted to evaluate for completion (27).

The use of robotic surgery has been popularized in the adult population, including for the Heller myotomy (28). In the pediatric population however, this is not widely used. In the current literature, only case reports exist and thus the standard remains as the laparoscopic approach (29).

As a natural orifice transluminal endoscopic surgery (NOTES) approach to achalasia, the peroral endoscopic myotomy (POEM) procedure was introduced as an important alternative to LHM. First described by Inoue et al. in 2010, POEM utilizes an endoscope to perform a longitudinal mucosotomy and tunnel down past the gastroesophageal junction (8). After demonstrating its minimally invasive benefit for adult patients, the POEM procedure has become an important treatment for achalasia in children (30). Overall, the clinical success and safety profile appears to be similar to that described in adults (16,31). Major steps of the POEM are depicted in Figure 4. 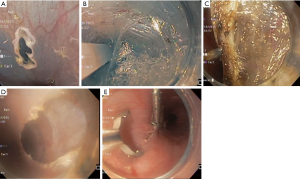 Outcomes following POEM in children are promising, as long-term follow up has demonstrated lower recurrence rates in comparison to both pneumatic dilation and LHM (32-34). A large, multicenter analysis of outcomes for 117 POEM procedures in children demonstrated that successful resolution of symptoms was achieved in 91% (31). In addition, a meta-analysis of 146 patients demonstrated a similarly high (93%) rate of success, with Eckardt scores reduced by an average of nearly 7 points (35). While the procedure is relatively new, the short- and long-term outcomes of the procedure appear to be comparable to LHM with the added benefit of having no incisions (30,31,33,35-37). In a large single-center series, cases of recurrent symptoms requiring additional interventions were fairly high (16/21, 76%); wherein most required only pneumatic dilations (13/21); 2 patients required repeat POEM; and 1 required laparoscopic Heller myotomy to provide definitive symptom relief (37). In our own experience with POEM in children thus far (19 patients), 17 have sustained symptomatic relief (89.5%) and 2 have required reintervention. One required a single endoscopic balloon dilatation and the second patient underwent pneumatic dilations and LHM following POEM, amounting to a 10.5% re-intervention rate.

Major complications following POEM are relatively low. In adults, pneumothorax (25%) and subcutaneous emphysema (56%) were most commonly found in a large series (38). In children, Choné et al. found that the incidence of adverse events was relatively low (6%), with most of these cases classified as mild in severity (31). Other series, including a large, single-center analysis analyzing minimally invasive procedures for pediatric achalasia confirmed that POEM complications remained exceedingly low (30,35,37).

The introduction of the endoscopic functional lumen imaging probe (EndoFLIP, Medtronic) device has allowed for the real-time, intraoperative evaluation of the effectiveness of the procedure (39,40). Similar to intraoperative endoscopic manometry, its use has allowed for the confirmation of an adequate myotomy performed at the time of operation (30). Due to its endoscopic nature, POEM can be easily combined with EndoFLIP to demonstrate adequacy of the myotomy. With these confirmatory measures, POEM remains an important therapeutic modality for pediatric achalasia. An example of intraoperative readings, before and after POEM intervention is demonstrated in Figure 5. 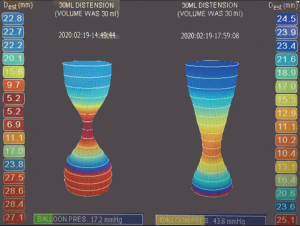 In patients with end-stage achalasia, partial or total esophageal resection may be required. In these cases, an esophageal reconstruction may be performed using gastric or colon conduits (41). This procedure is associated with a 2% mortality rate, according to a large meta-analysis in adults; fortunately, end-stage achalasia is an exceedingly rare occurrence in the pediatric population (41).

The development of preventive treatments has been extremely difficult in achalasia, primarily due to the fact that asymptomatic patients cannot be detected (2). Subclinical symptoms may be treated unsuccessfully for years; by the time achalasia is definitively diagnosed, most patients require an intervention – all of which have an observed recurrence rate (16).

Nevertheless, the need for large, prospective trials involving children with achalasia is clear. While meta-analyses and systemic reviews have provided compiled data, the development of an individualized method for determining the best candidates for LHM vs. POEM, along with available endoscopic therapies, remains extremely important for future improvement.

Provenance and Peer Review: This article was commissioned by the Guest Editors (Eduardo Perez, Samir Pandya, and Matthew S. Clifton) for the series “Current Topics in Pediatric General Surgery” published in Translational Gastroenterology and Hepatology. The article has undergone external peer review.

Conflicts of Interest: All authors have completed the ICMJE uniform disclosure form (available at http://dx.doi.org/10.21037/tgh-20-215). The series “Current Topics in Pediatric General Surgery” was commissioned by the editorial office without any funding or sponsorship. The authors have no other conflicts of interests to declare.