Several authors have reported comorbidities as relative contraindications for gastrectomy without calculating the cumulative effect of several coexisting comorbidities in the postoperative complication rate of any patient. Conventional risk assessment scores such as the American Society of Anesthesiologist (ASA) score or the Postoperative Score to Predict Postoperative Mortality (POSPOM) are of limited clinical use; either because they include a small number of preoperative factors or because they are too complex (4). Obviously, there is an imperative need for studying multiple preoperative clinical risk factors and developing a simple, objective and reliable risk assessment score which would estimate the patient’s cumulative health deficit. Recent studies have explored the role of frailty in estimating the postoperative risk after different types of operations. A practical way of frailty measurement is the modified frailty index (mFI), which was first described by Velanovich et al. (5). Although several studies exist on mFI score as a surgical risk calculator, there are no studies on mFI score for patients undergoing gastrectomy for non-bariatric diseases.

This is a retrospective cohort analysis of prospectively collected data from the ACS-NSQIP database. The ACS-NSQIP is a national quality improvement program with participation of more than 600 hospitals in 49 of the 50 states. Data is collected on over 150 variables, including preoperative risk factors, intraoperative variables, and postoperative mortality and morbidity (6).

All outcomes were monitored in the first 30 postoperative days after gastrectomy. MFI score was calculated based on methodology recently described by Velanovich et al. (5). Every patient was allotted one point for each of the following preoperative comorbidity if abnormal: (I) patient functional status (dependent or not dependent); (II) diabetes mellitus (treated with insulin or oral medications); (III) hypertension (requiring treatment); (IV) congestive heart failure (CHF); (V) myocardial infarction (MI); (VI) either prior cardiac surgery and/or percutaneous coronary angioplasty and/or history of angina; (VII) chronic obstructive pulmonary disease (COPD) and/or history of pneumonia; (VIII) rest pain/gangrene secondary to peripheral vascular disease (PVD) and/or PVD with treatment (angioplasty or revascularization or amputation); (IX) impaired sensorium within 48 hours prior to the surgical procedure (not in the context of current neurologic disease like dementia); (X) history of transient ischemic attack (TIA) and/or cerebrovascular accident (CVA) without neurologic deficit and (XI) CVA with neurologic deficit. The total mFI was calculated for every patient. The possible mFI score range from zero to eleven, but in our study population the mFI score range from zero to seven (Table 1). For ease of interpretation and easier future clinical use, the total population was divided into four groups to determine the relationship of frailty to mortality, morbidity and failure to rescue. This was a similar method described by Augustin et al. (7). The four groups of mFI are the following: no frailty group (with mFI score zero), low frailty group (with mFI score 1), intermediate frailty group (with mFI score 2) and frail group (with mFI score ≥3) (Table 2). 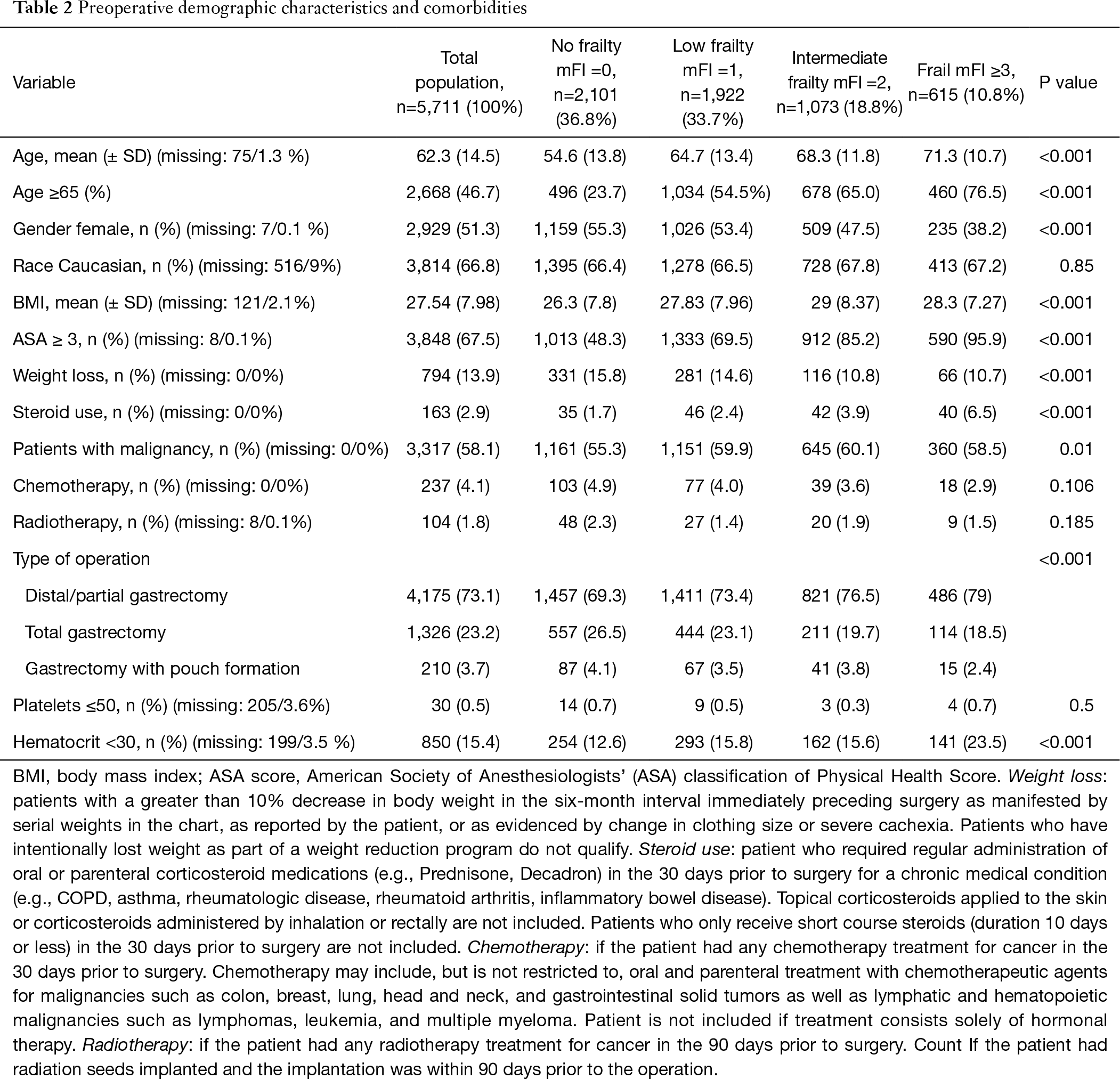 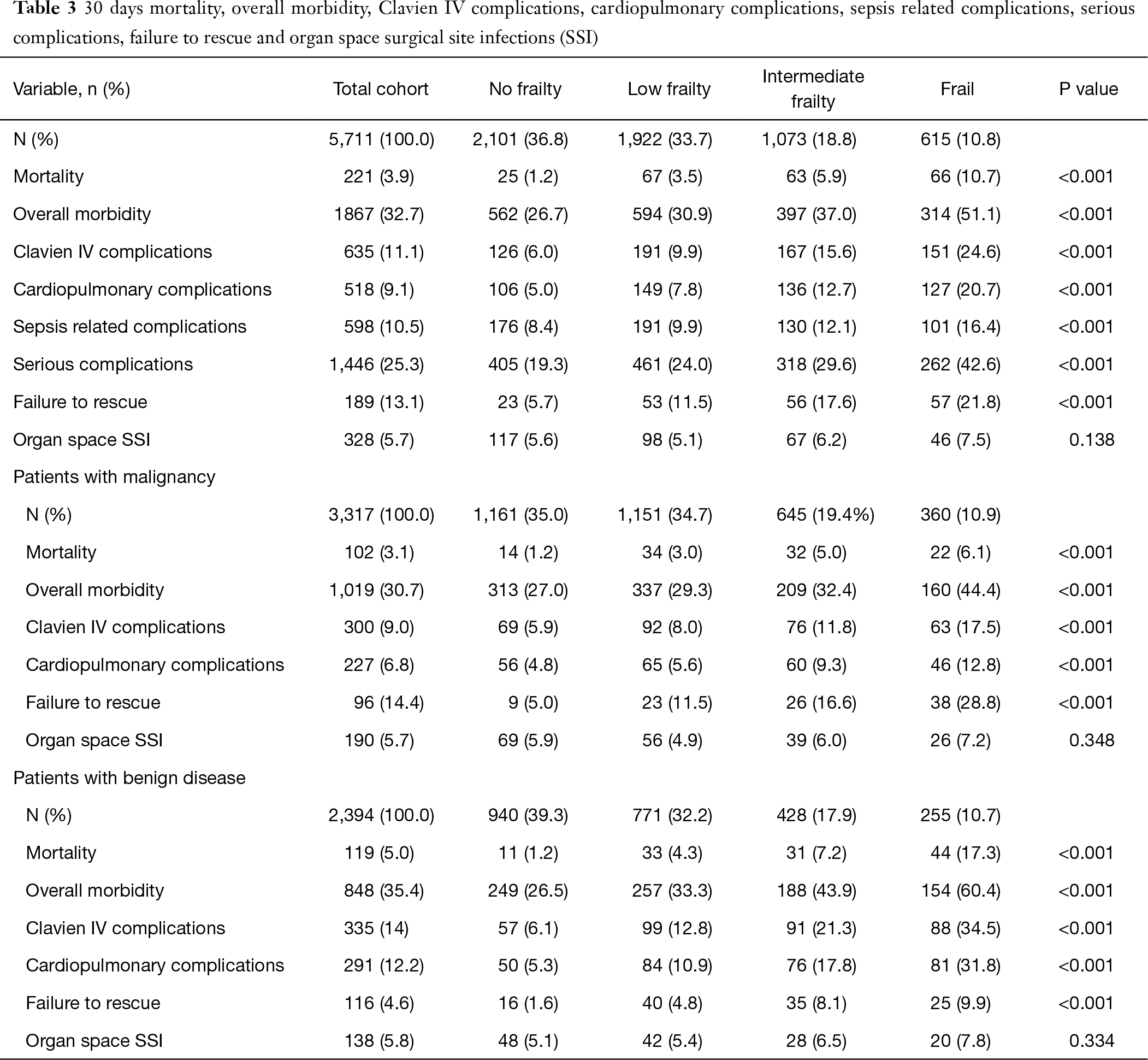 Statistical analysis was performed using the program SPSS Statistics Version 24. Data on categorical variables were expressed as frequencies and proportions (%) and were compared between groups of frailty using the Chi-Square test. Data on continuous variables were summarized with descriptive statistics such as means and standard deviations (SDs), and group comparisons of these variables were performed using the ANOVA test. Univariable logistic regression models were used to examine the associations of frailty and other individual predictor variables with the CLIVC and mortality one at a time. Furthermore, multivariable logistic regression was performed to understand the relationship of frailty with the odds of patients having a CLIVC or mortality, after controlling the statistically significant factors in the univariate analysis. Age and BMI transformed to categorical variables in univariate and multivariable analysis for easier future clinical use. Patients were categorized in those with age 65 or older and patients with age <65. Respectively patients were grouped in those with BMI 30 or higher and patients with BMI <30. Wald tests were used to assess the significant contribution of each predictor variables, and unadjusted raw or adjusted odds ratios and their 95% confidence intervals (CIs) were reported as appropriate for both CLIVC and mortality. Two-tailed P values of less than 0.05 were deemed statistically significant. Finally, the impact of every individual frailty component was studied, and the odds of CLIVC and mortality calculated for each particular mFI component.

Baseline characteristics of the population

The final population after applying the exclusion criteria was 5,711 patients (Figure 1). There were 2,101 (36.8%) patients with no frailty, 1,922 (33.7%) patient with low frailty (mFI score 1), 1,073 (18.8%) with intermediate frailty (mFI score 2) and 615 (10.8%) frail patients (mFI score ≥3) (Table 2). The mean age of the population was 62.3 (±14.5) and higher mFI groups had higher means of age compared to the non-frail group. The overall BMI was 27.5 (±7.98) with significantly higher BMI patients in the intermediate and frail groups. Of the total population, 2,929 (51.3%) patients were female, and 3,814 (66.8) patients were Caucasian. Higher frailty groups include increased rates of male patients, ASA scores ≥3 and malignancy; and decreased percentages of body weight loss (>10% in the last six months before the operation), preoperative chemotherapy, and preoperative radiotherapy. Further information of the patient’s demographic and preoperative tests are summarized in Table 2. For the multivariable analysis we grouped the procedures in distal/partial gastrectomies, total gastrectomies and gastrectomy with pouch formation. 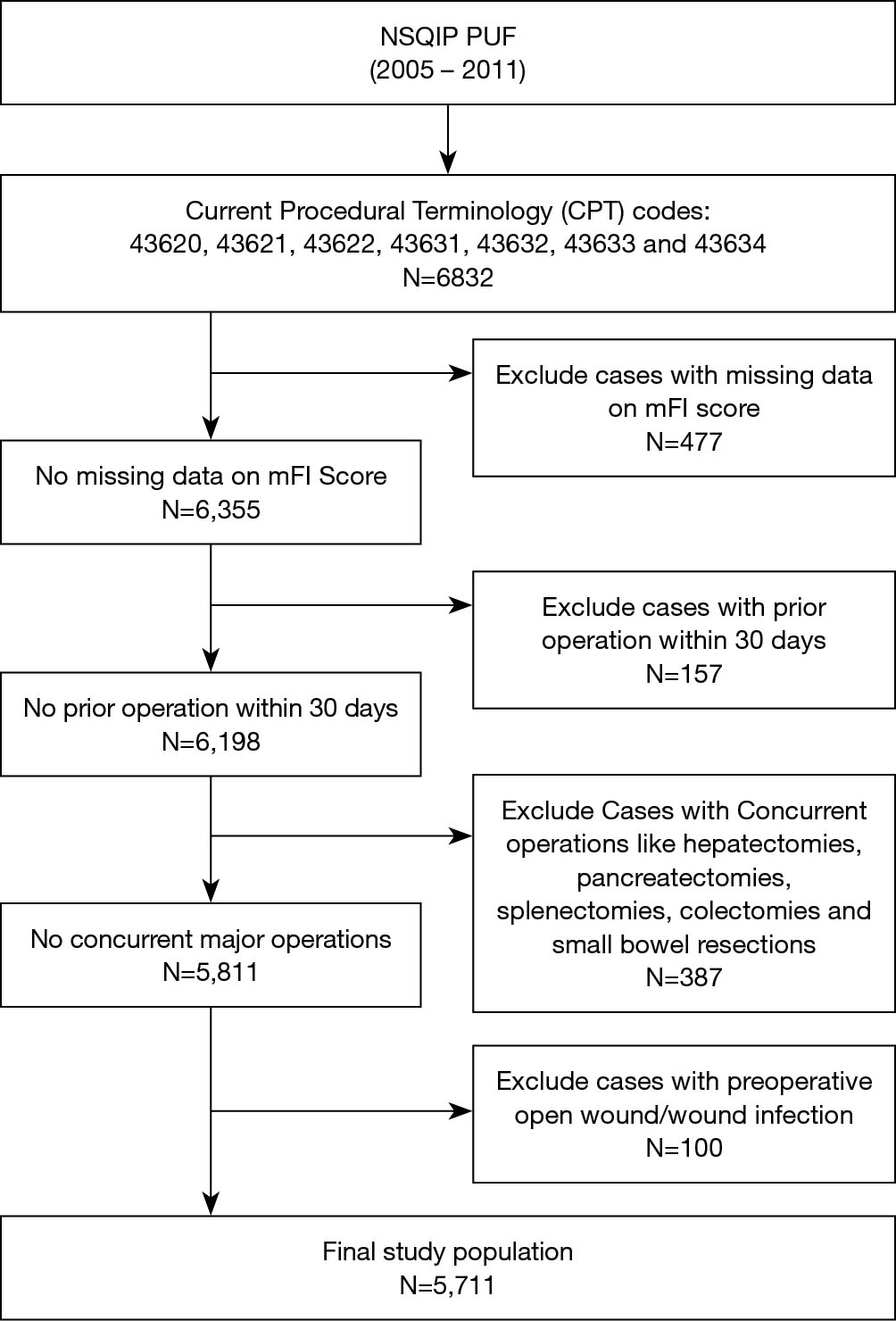 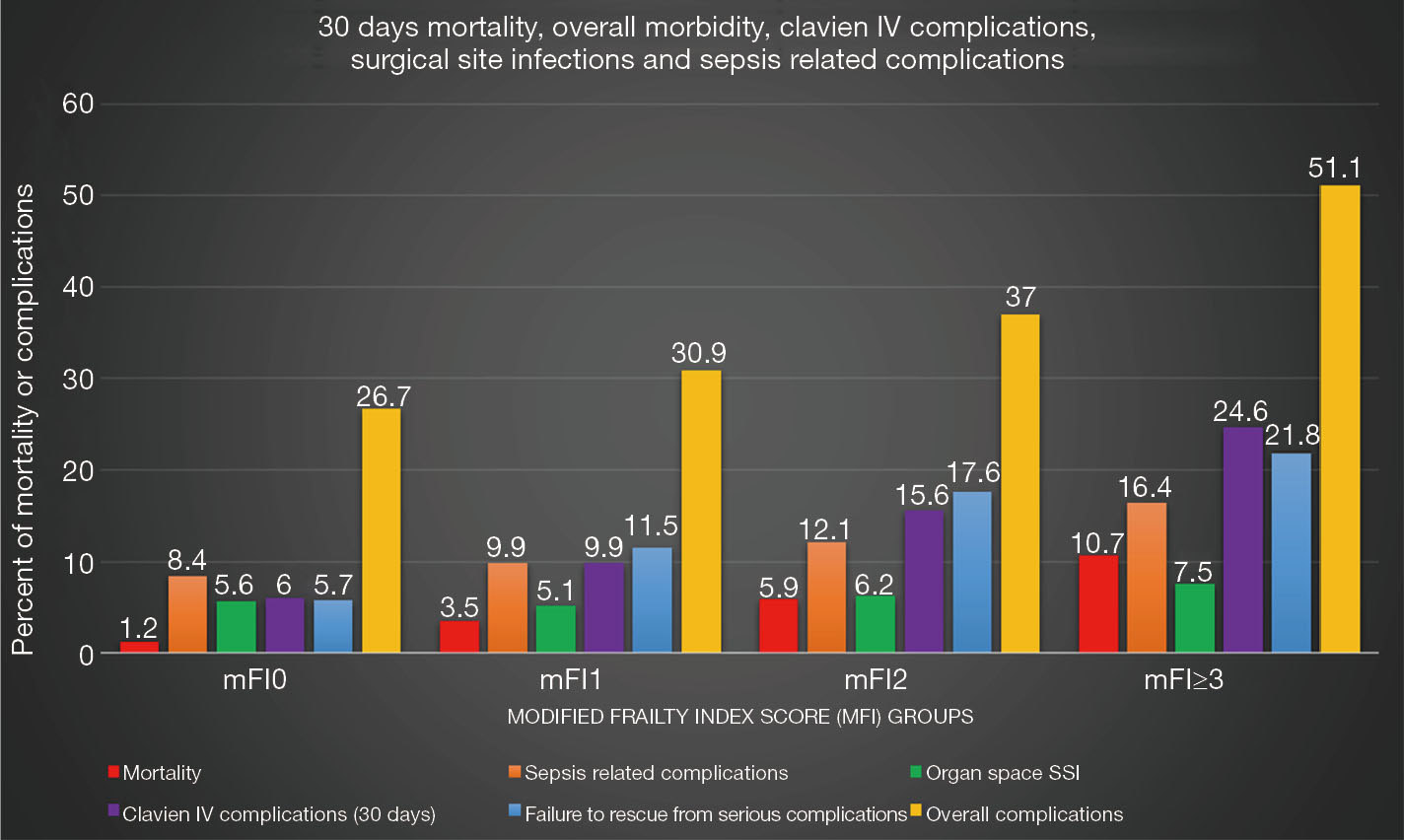 Because mFI is not weighted and there was a possibility that every component of frailty calculation has different impact on postoperative morbidity and mortality, we analyzed the individual contribution of each frailty component toward the risk of CLIVC and mortality (Table 5). It appears that functional status, hypertension, CHF, MI, CS or angina or PCA history, COPD or pneumonia, PVD or Rest Pain and Impaired Sensorium are the mFI factors that steadily influence the final mFI score predictive value on both mortality and CLIVC. Diabetes Mellitus and TIA or CVA without neurologic deficit seems to affect the mFI score only on the CLIVC prediction. On the other hand CVA with neurologic deficits seems to affect the mFI score only on the mortality prediction and not on CLIVC prediction. 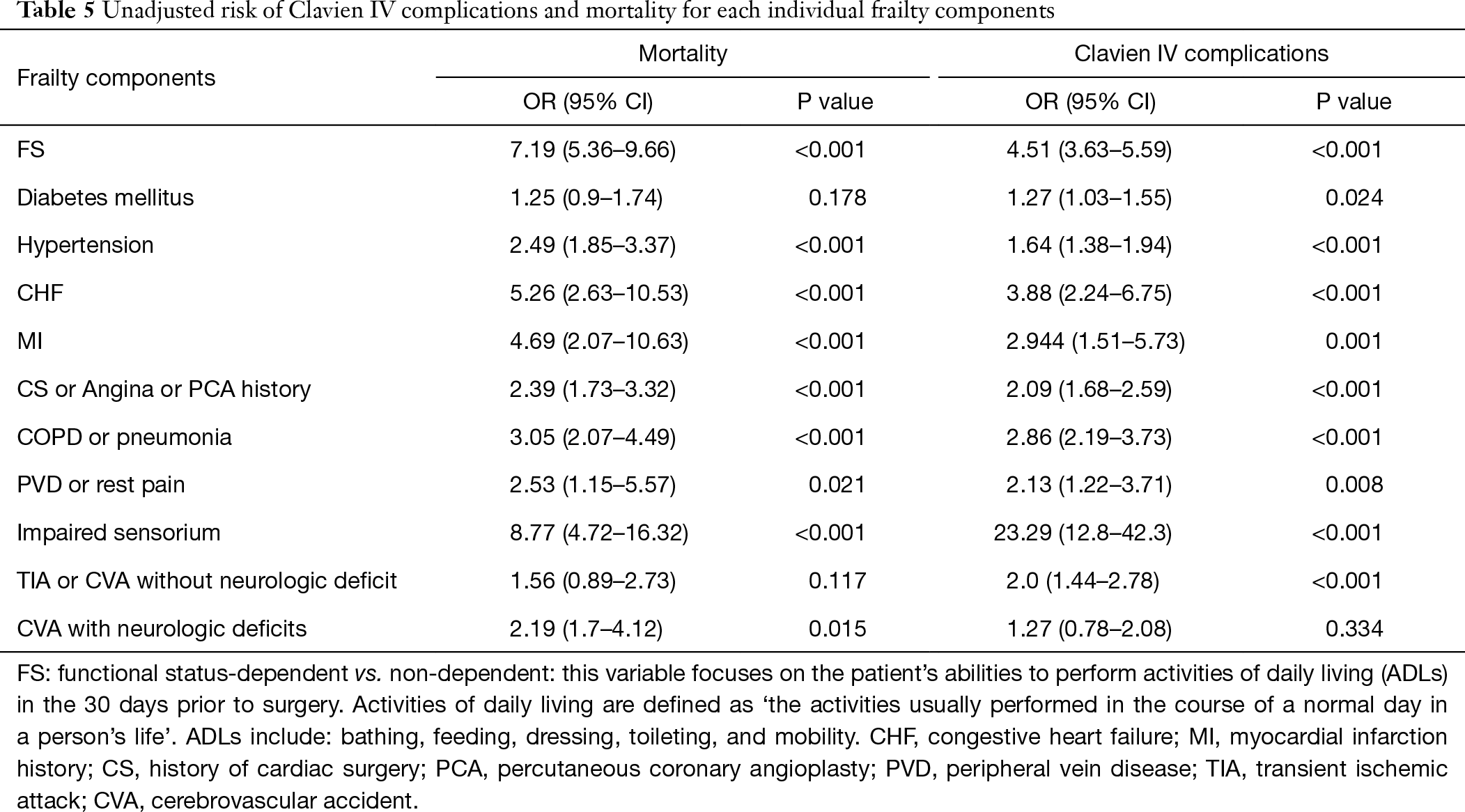 Gastrectomy remains as the main curative treatment option for any patient with either malignant or benign gastric tumor. However, gastrectomy is associated with significant morbidity and mortality (2,3). These can be attributed to: the complexity of the particular operation and also to the fact that patient undergoing gastrectomy are usually older with many comorbidities (1,11). Models used in the past lacking predictive value or are too laborious to use (11). Moreover, the majority of recent studies for preoperative risk estimation in gastrectomy have focused on either single risk factors or single postoperative outcomes, both of which have limited clinical use (2,12,13). We used a simplified method of calculation mFI tailored to the ACS-NSQIP (5).

Our results provide compelling evidence that mFI is a powerful predicting model for 30-day mortality, CLVIC and postoperative failure to rescue after a serious complication. The present study revealed that frail patients undergoing gastrectomy have almost 290% higher odds of having a CLIVC complication and more that 400% higher odds of having postoperative mortality. Also, we found that frail patients undergoing gastrectomy have significantly higher rates of any complication, cardiopulmonary complications, sepsis-related complications and failure to rescue from a serious complication. However, frail patients undergoing gastrectomy were not found to have significantly higher rates of postoperative organ space SSI which would suggest anastomotic leaks. This supports the idea of reduced physiologic reserves, and not technical errors as the root cause. Our results are analogous to existing studies of mFI for other operations like hepatectomies, pancreatectomies, necrosectomies and gynecologic operations. The mFI score is a highly useful tool for daily clinical use (14-17).

This study has several limitations, both in data extraction and database design. First, the preoperative variables are predefined for specific comorbidities and laboratories, and much critical information is lacking. For example, the information regarded the total glycated hemoglobin for diabetic patients is not available. Therefore, we cannot differentiate patients with poorly controlled diabetes mellitus from those with optimal control. Also, the postoperative outcomes are limited to the postoperative 30-day period. Furthermore, NSQIP database has significant limitations on technical-related complications report, and these complications can incorrectly be attributed to preoperative patient’s frail status (18). Finally, our study is subjected to all potential limitations of a retrospective study.

Future work can be focused on incorporating more factors in the model and adding details such as genetic information, laboratory values as well as social such as smoking, alcohol or illicit drug use of the patient. Furthermore, the mFI score can be applied to new mobile or computer applications, and play a fundamental role in the decision-making process, something already proposed by Koble et al. (17).

In conclusion, mFI incorporation in preoperative assessment of patient undergoing gastrectomy adds valuable information regarding the postoperative morbidity, mortality and failure to rescue after a serious complication.

The American College of Surgeons National Surgical Quality Improvement Program and the hospitals participating in the ACS NSQIP are the source of the data used herein; they have not verified and are not responsible for the statistical validity of the data analysis or the conclusions derived by the authors. We would like to thank Dr. Andres for assistance with statistical analysis.

Provenance and Peer Review: This article was a free submission to the journal. The article has undergone external peer review.

Conflicts of Interest: All authors have completed the ICMJE uniform disclosure form (available at http://dx.doi.org/10.21037/tgh.2020.01.07). The authors have no conflicts of interest to declare.

Ethical Statement: The authors are accountable for all aspects of the work in ensuring that questions related to the accuracy or integrity of any part of the work are appropriately investigated and resolved. The NSQIP data base is a de-identified patient database and consequently our study was exempt from institutional review board (IRB) approval.