Endocytoscopy: technology and clinical application in the lower GI tract

Endoscopy has an important role in determining the treatment strategy for colorectal tumors. The technology and endoscopic diagnosis of colorectal lesions has been developed together with magnified endoscopy. On the other hand, endocytoscopy can visualize white-light images at higher resolution. Using this technology, we can recognize and evaluate the histological structure of the colon epithelium, so called “virtual histology” or “optical biopsy” (1). 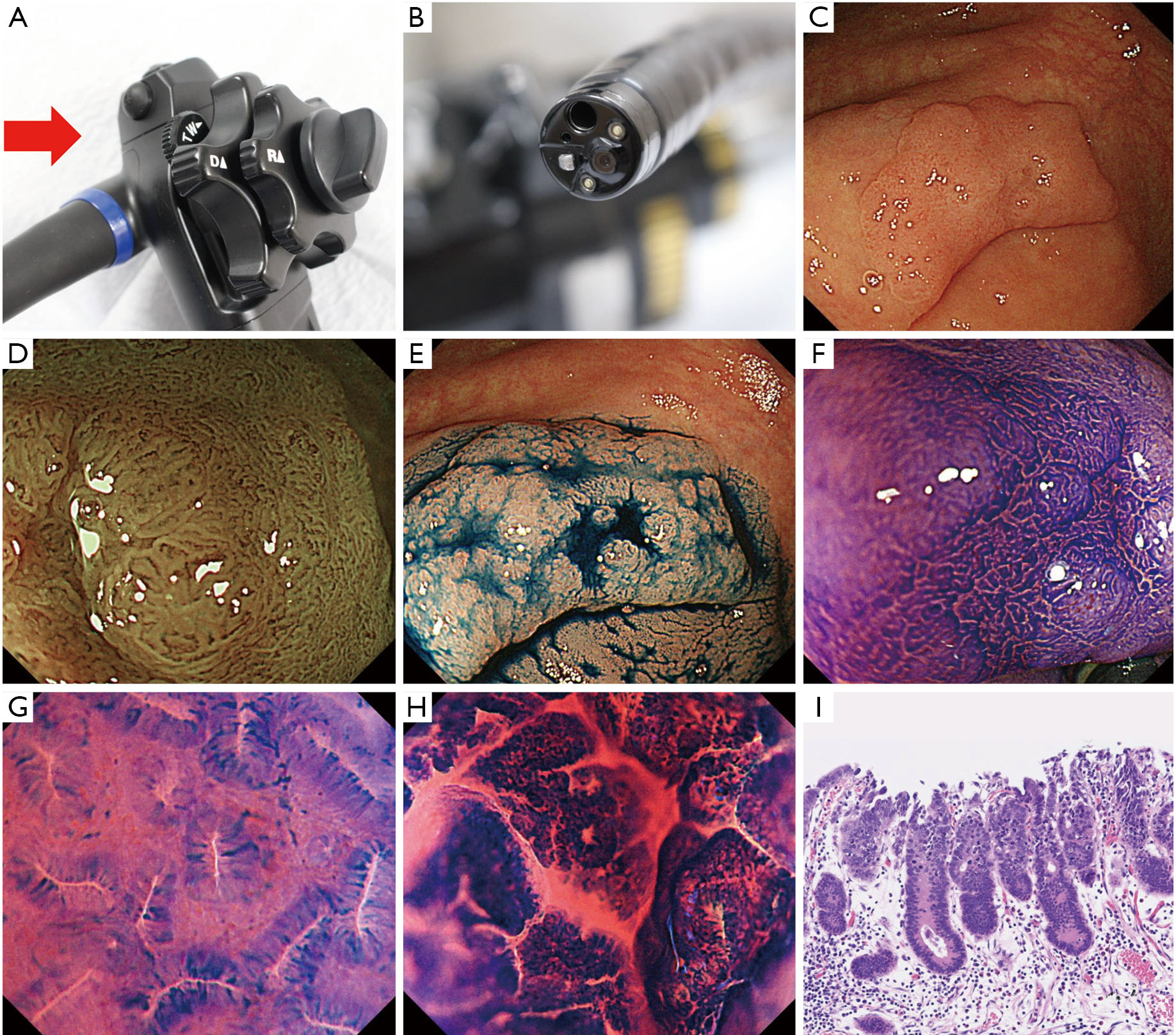 The clinical questions in this review are as follows:

In this review, the current situation of endocytoscopy is discussed, including the diagnostic performance and usefulness of artificial intelligence (AI) or computer assisted diagnosis (CAD) for colorectal tumors, along with the clinical application and future prospect of these technology.

An electronic search via Ovid MEDLINE for articles up to September 2019 was performed using the keywords “endocytoscopy” or “endocytoscopes”. The language was limited to English. After reviewing the titles and abstracts, reports analyzing upper gastrointestinal tract, biliary system, pancreas, liver, bladder, lung, head and neck were excluded. Upon assessing the full text of the remaining articles, reports analyzing inflammatory bowel disease (IBD), juvenile polyps, infection, and parasite were excluded. Case reports were also eliminated. In this meta-analysis, the primary outcome measurement was the diagnostic accuracy of endocytoscopy for colorectal neoplasms compared with magnified chromoendoscopy. The results of binary outcomes were summarized, and comparisons of the diagnostic performance were presented as risk ratios with corresponding 95% confidential intervals. The statistical analysis of the results in this study was calculated using odds ratio, where events represent the number of lesions correctly diagnosed. Comparison of events, in this case the events meant the number of patients who was accurately diagnose, was made between endocytoscopy and magnified chromoendoscopy.

Assessment of the risk of bias was evaluated using a ‘risk’ of ‘bias’ summary figure. A funnel plot was used to assess reporting and selection bias.

The electronic search identified a total of 166 potentially relevant reports. After the abstracts were reviewed, 98 studies were excluded. Fifty-nine studied were obtained for full text review, and 19 articles were subsequently excluded being case reports, studies targeting IBD or other diseases listed above. Ultimately, a total of 40 studies were included in this review. Among them, 4 studies comparing the diagnostic performance of endocytoscopy classification (EC classification) versus pit pattern diagnosis using magnified chromoendoscopy in the depth estimation of colorectal lesions were analyzed (Figure 2). 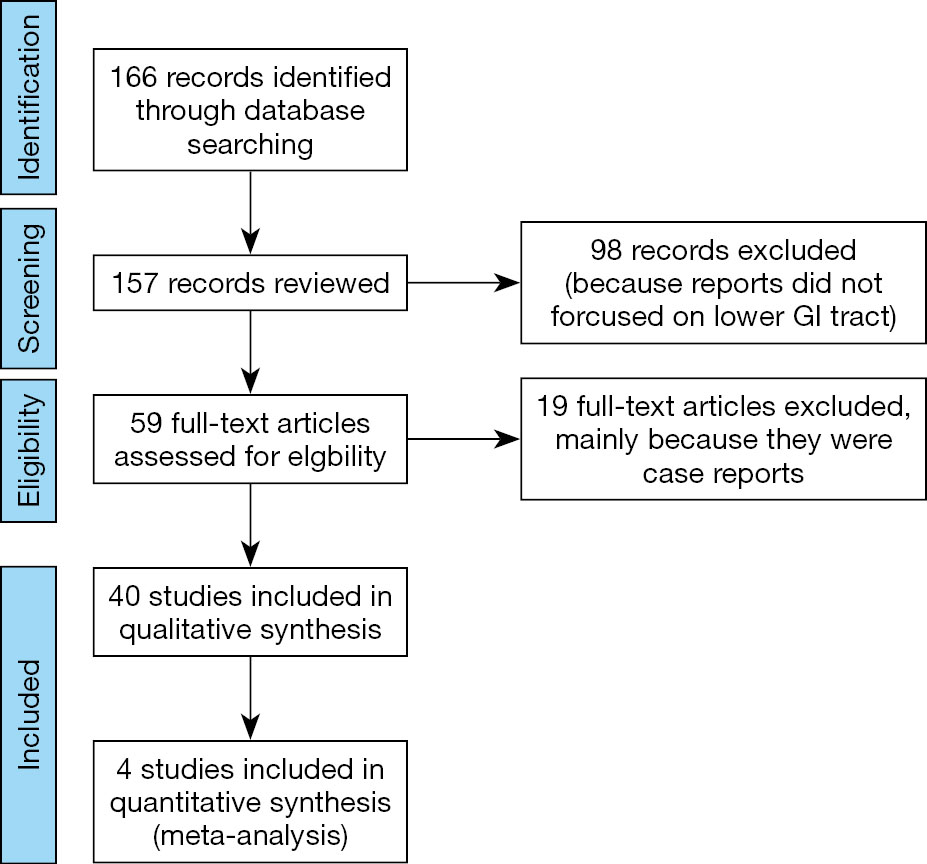 To characterize colorectal lesions by endocytoscopy, the endocytoscopic classification (EC classification) was described and adopted (6). The diagnostic accuracy in the discrimination between neoplasm and non-neoplasm, including those less than 5mm in size, was reported to be 93.3–96.8% (1,5-7). Moreover, some studies reported higher diagnostic accuracy for hyperplastic polyp by endocytoscopy utilizing the EC-V classification. The technology is also effective in the differential diagnosis of SSA/P, and detection of desmoplastic reaction in T1 colorectal cancer (8,11,17). Sako et al. reported that the cribriform-like pattern named as “fused gland formations on endocytoscopy (FGFE)”, can be used to diagnose histological grade (12). Table 1 summarized the studies which reported on characteristic diagnosis using endocytoscopy.

In these reports, 4 studies analyzed the diagnostic performance of depth assessment using endocytoscopy versus pit pattern diagnosis. All of the 4 studies were retrospectively in nature, and selection bias is likely. However, the endoscopists and pathologists who evaluated the endoscopic and histological findings were blinded, hence performance and detection bias were less likely. The risk of bias summary and graph are shown in Figures 3 and 4, respectively. 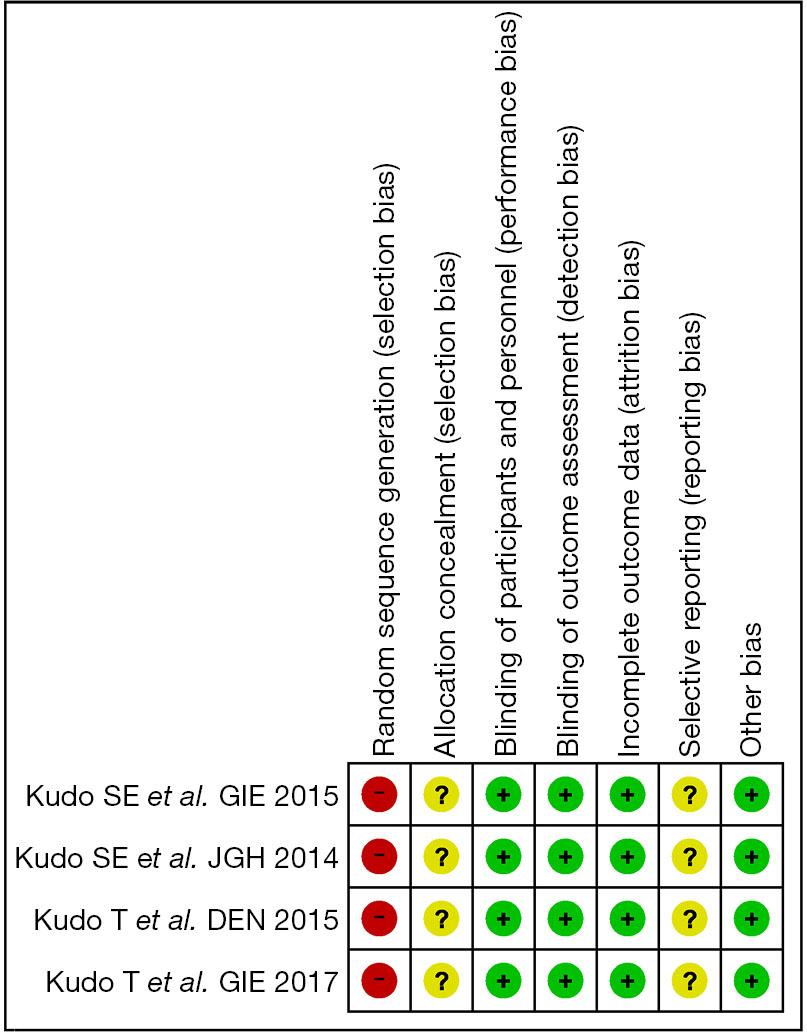 The diagnostic performance of endocytoscopy compared to pit pattern diagnosis was better and the result was statistically significant (odds ratio =1.31; 95% CI, 1.00–1.71; I2=0%; P=0.05; Figure 5). The funnel plot of the studies is almost symmetrical suggesting the intervention effect of each study is similar (Figure 6). 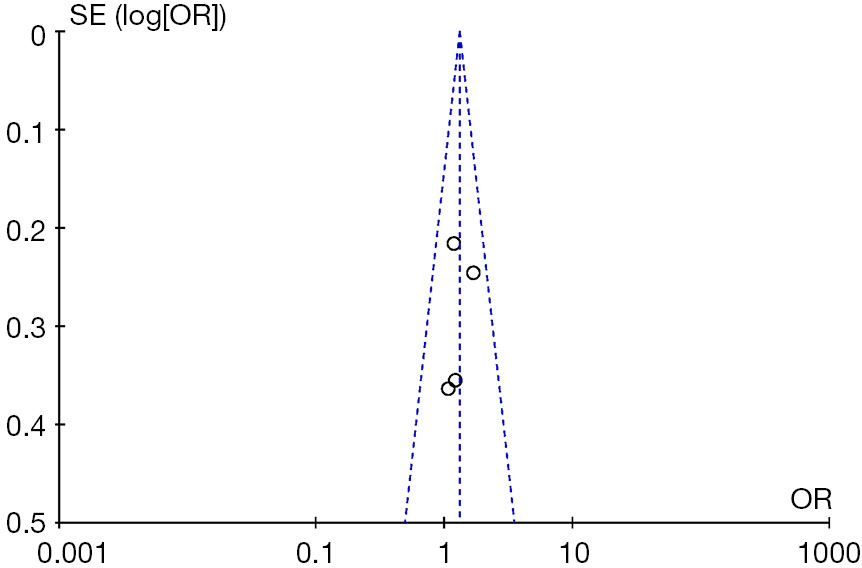 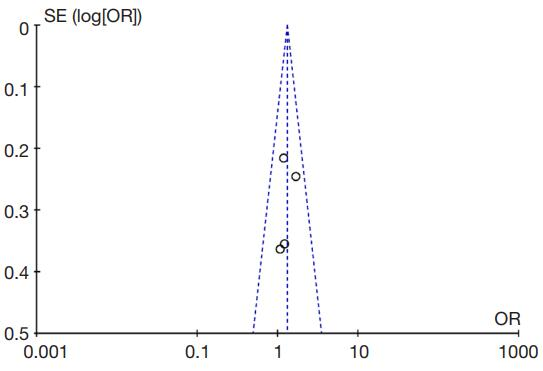 There are studies investigating AI or CAD-assisted endocytoscopy in the differentiation between neoplastic and non-neoplastic colonic lesion, diagnosis of adenomatous lesion using EC-V, and depth diagnosis of T1 colorectal cancer with crystal violet and methylene blue double staining (21-26). The diagnostic accuracy of CAD for neoplastic colorectal lesion using double staining was 89.0% to 98.1% in the studies (21-23), while CAD with NBI showed accuracy of 87.8–95.2% (23,25,26). Takeda et al. reported that the accuracy of CAD in detecting invasive colorectal cancer was 94.1% (24). In several studies the reported diagnostic performance of CAD was superior to that of non-experts and comparable to experts.

CAD-assisted endocytoscopy, with its application to differentiate between neoplastic or non-neoplastic colorectal lesions, has recently been approved by the Japanese Pharmaceuticals and Medical Devices Agency. The technology has become commercially available.

To the extent of our knowledge, this is the first review of endocytoscopy which includes a meta-analysis. Endocytoscopy provide real time cellular imaging and enables the assessment of epithelial structure, the so called “virtual histology”. One of the clinical questions regarding endocytoscopy was the diagnostic ability compared with magnified chromoendoscopy, and several studies have attempted to clarify this. Although there are limited number of studies to date, endocytoscopy has been demonstrated to show a trend towards effective colorectal tumor depth diagnosis.

Even though the funnel plot was symmetrical, one should still take into consideration the potential of publication bias. Almost all studies with large numbers of cases reported were from the same institution. This means external validation of the diagnostic performance of endocytoscopy is limited. One of the reasons was because endocytoscopy was not commercially available until recently, and many studies were conducted using only the endocytoscope prototype.

Another related topic is AI/CAD automated diagnosis. Applying AI/CAD technology can potentially resolve the so called “frame problem” during endocytoscopy (27). In general, AI/CAD performance is difficult if the region of interest (ROI), number of lesions, or the margin of the lesion are uncertain. The image depicted by endocytoscopy assumes the entire image is the lesion in question, therefore ROI is not considered. On the other hand, it means the images processed by AI/CAD is completely dependent on the image captured by the endoscopists.

Endocytoscopy will have a more definite role when endoscopic submucosal dissection (ESD) becomes widespread. The existing studies reported on the diagnostic performance of the technique are not only limited to small polyps, but also larger lesions including lateral spreading tumor (LST). Kudo et al. demonstrated the diagnostic accuracy of estimating invasion depth in the different morphological types of colorectal tumors. Endocytoscopy was more accurate in diagnosing invasion depth of LST-non-granular (NG) type lesions, while pit pattern diagnosis performed better in protruding lesions (15).

As mentioned, studies have shown that AI/CAD-assisted endocytoscopy provided higher diagnostic accuracy of colorectal lesions for non-expert endoscopists comparable to experts. In terms of the clinical application, AI/CAD technology may be advantageous, especially for novice endoscopists.

This article systematically reviewed comparative studies to investigate the current clinical applicability of endocytoscopy, and its diagnostic performance compared with magnified chromoendoscopy. Bearing in mind the limited number of studies, this systematic review and meta-analysis supports the finding of the statistically significant diagnostic performance of endocytoscopy for colorectal neoplasm depth diagnosis.

I would like to express my deepest gratitude to Dr. Shigeki Sekine for clinical and histological suggestions for my study.