What is Barrett’s esophagus (BE)?

BE is a condition in which metaplastic columnar epithelium with both gastric and intestinal features replaces the stratified squamous epithelium normally lining the esophagus. BE develops as a result of chronic gastroesophageal reflux disease (GERD) and predisposes to development of adenocarcinoma of the esophagus (EAC) by a risk of 40 to 50 fold over the general population. It is estimated that 5.6% of American Adults have BE, however many go undiagnosed (1). A 2003 study from the University of Indiana with 961 patients undergoing EGD and colonoscopy found that the prevalence was 6.8%. Among 556 patients that denied GERD symptoms, the incidence was 5.6%. Of the 384 patients that reported GERD symptoms, the incidence was 8.3%, most being of the short segment type (2).

After a columnar lined esophagus >1 cm is seen on endoscopy, biopsies will assist in classifying as non-dysplastic, indefinite for dysplasia, dysplastic or EAC. Dysplasia can further be characterized as low grade (LGD), high grade (HGD), or intramucosal carcinoma (IMC). Estimates of annual incidence of cancer in BE varies from 0.1% to 0.4% based on available studies suggesting that the rate of progression for the general population with BE is 0.25% per year, a rate of 0.54% per year for LGD and as high as 4–8% per year in HGD (3-5). Once a diagnosis of BE is established treatment modality is based on the presence and degree of dysplasia, in addition to indefinite proton pump inhibitor therapy and ACG recommended surveillance. Non-dysplastic BE can typically have surveillance endoscopy every 3–5 years (6). Endoscopic treatment typically starts when HGD or early EAC is seen and initially treated with endoscopic resection techniques, such as resection cap, multi band mucosectomy, or submucosal dissection, followed by RFA or hybrid argon plasma coagulation (7-13). RFA can be used on HGD dysplasia and IMC after endoscopic mucosal resection, however, most patients undergoing RFA will have flat or non-visible HGD, or LGD. The use of RFA in non-dysplastic BE is controversial as the risk of cancer progression in these patients is extremely low and thus should be avoided (3-5). Esophagectomy is usually reserved for Invasive EAC and can carry a significant morbidity, ranging from 4.9% to 12.1% based on current studies (14).

How to screen and survey in BE patients?

Screening for BE can be considered in men with chronic or frequent GERD who have additional risk factors including age over 50, white race, hiatal hernia, elevated body mass index and intra-abdominal distribution of fat (6). The current gold standard diagnosis of BE starts with upper endoscopy with visualization under white light endoscopy (WLE), where pink or salmon colored mucosa extending for >1 cm above the GEJ will typically be seen in comparison to normal squamous mucosa. The extent of metaplastic change is then described using the Prague C&M classification in addition to the location of the diaphragmatic pinch, gastroesophageal junction (GEJ), and squamocolumnar junction (15,16). Biopsies are obtained to determine presence of dysplasia for further progression to EAC. The Seattle Protocol is the method used where 4 quadrant biopsy specimens are obtained every 2 cm intervals in those without mucosal irregularities or prior dysplasia and 1 cm in those with irregularities or prior dysplasia (15,17). This is in addition to targeted biopsy sampling of visible abnormalities.

Dysplasia may not be apparent during inspection with WLE. As this protocol is not without flaws, missed disease can occur, with estimated 25.3% of procedures related to esophageal adenocarcinoma (EAC) occurring within one year of surveillance endoscopy (18). Current guidelines suggest the use of high definition WLE when detecting dysplastic lesions as evidence shows its superiority to standard definition (15,19,20). In addition, as the BE segment increases, the time needed for proper surveillance does as well. Longer inspection times have shown to increase detection of dysplasia (15,21,22). One study shows adherence in the community to the Seattle protocol decreases as the BE segment gets longer (23). One response to the increased surveillance time needed was wide-area epithelial sampling (WATS.) Rather than obtaining a discreet number of forceps biopsies per quadrant, WATS uses an abrasive brush to circumferentially sweep the esophagus to yield samples of the surface and deeper layers that are then analyzed by a computer (15,24).

Other advanced modalities allow targeted biopsies to be obtained, rather than random. These include narrow band imaging (NBI), Chromoendoscopy and Confocal laser endomicroscopy (CLE.) NBI uses the blue-green spectrum of light (415–540 nm) to capitalize on peak absorption of hemoglobin accentuating visualization of mucosal vasculature. The field of view is 140º with a depth of 3–100 mm (15,21). Chromoendoscopy is the use of absorptive and contrast stains applied to esophageal mucosa to highlight superficial mucosal architecture and is used in conjunction with WLE (15). The equipment needed is widely available and the stains are generally inexpensive and safe. CLE utilizes fluorescence emission by a low powered laser that can generate in vivo images of esophageal mucosa at histologic-level resolution. This can be endoscope based (eCLE) with a field of view of 475 µm or probe based (pCLE) with a field of view of 240–600 µm (15).

The Preservation and Incorporation of Valuable Endoscopic Innovations Committee (PIVI) of the ASGE developed performance thresholds for using image assisted targeted biopsies during surveillance as 90% sensitivity, 80% Specificity and negative predictive value of 98% for detecting HGD or EAC (25). Of the newer modalities, only NBI, eCLE and chromoendoscopy with acetic acid have been recommended based on these performance thresholds (26,27).

What is volumetric laser endomicroscopy (VLE)? 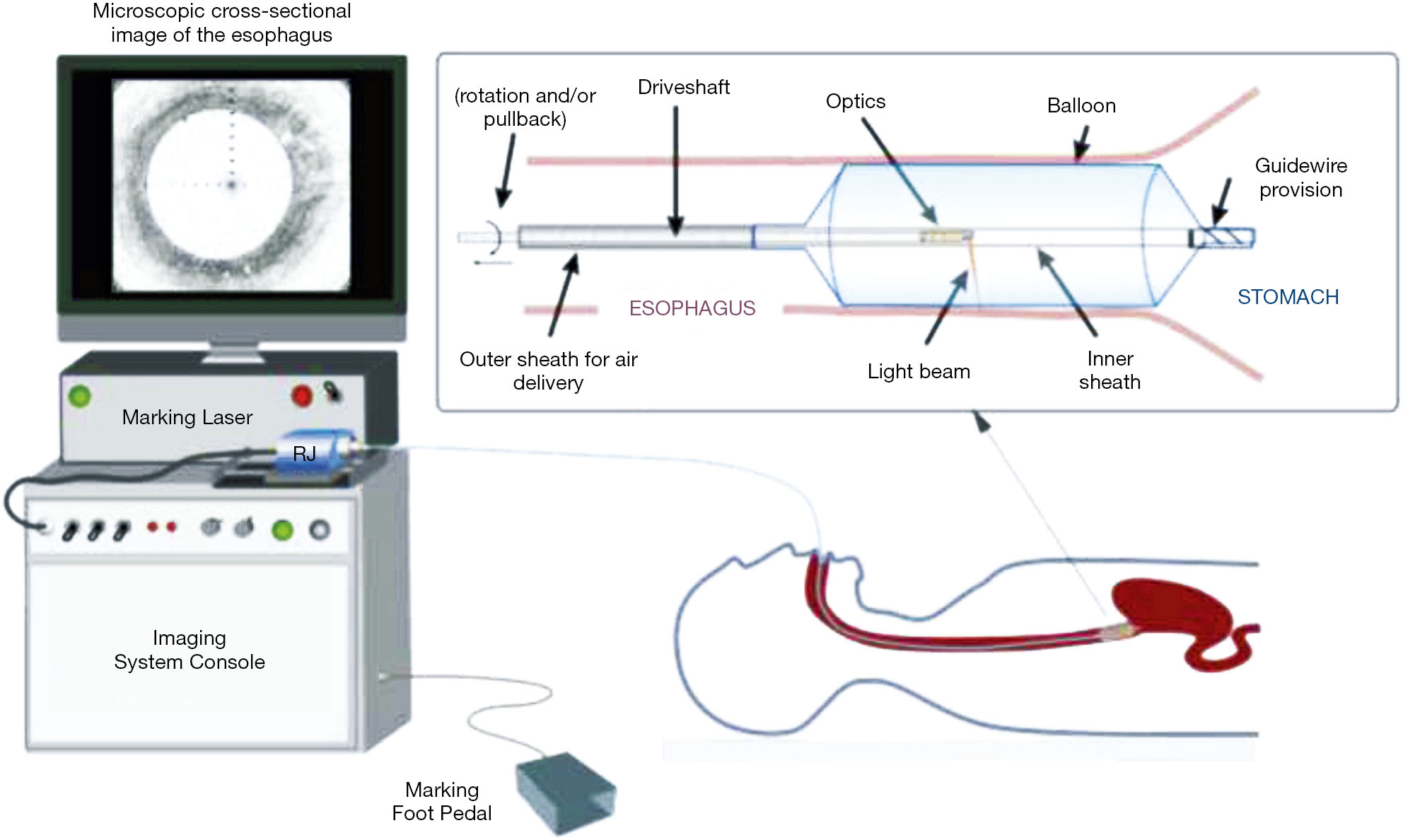 Figure 1 Schematic of the VLE-guided biopsy system and balloon-centering catheter. The interchangeable balloon catheter is inserted into the esophagus at the gastroesophageal junction and inflated. The balloon catheter is connected to the imaging system via an optical rotary junction. The rotary junction spins a driveshaft that encloses an optical fiber. The optical fiber is terminated by focusing optics at the distal end that spin with the driveshaft. The driveshaft is pulled back while spinning to effectuate a helical OCT scan of the esophagus. A foot pedal is used to initiate laser marking. The entire procedure is monitored by real-time visualization of the displayed, cross-sectional OCT image. VLE, volumetric laser endomicroscopy; OCT, optical coherence tomography. (Figure used with permission) (29).

VLE in BE patients has been evaluated in surveillance of high risk, treatment naive patients, to assist in treatment selection of those with previously detected precancerous or cancerous lesions, and in surveillance post treatment. VLE has been used in staging early squamous cell carcinoma of the esophagus as well as to guide endoscopic myotomy for treatment of achalasia. A smaller version of the probe without the balloon based system has recently been developed for use with smaller lumens, most commonly the common bile duct and pancreatic duct with the hopes of better detection of pre-neoplastic and neoplastic lesions of the pancreaticobiliary system (30). VLE scans are reviewed manually based on an enhanced diagnostic algorithm and imaging characteristics. These include surface intensity greater than subsurface intensity, lack of layering, and presence of irregular and dilated glands/ducts (31-33).

Some of the proposed disadvantages to VLE include the training necessary to be proficient. Although studies are limited, early evidence suggests that the learning curve appears short (30). The learning curve after a brief training session for 31 novice clinicians showed that 71% were able to achieve competency during the 96-slide review, with half achieving competency at 65 slides (16,34). Another drawback is high initial capital costs that generally limited its use to academic centers. Analysis of cost effectiveness is still ongoing given how new the technology is, but long term savings from faster imaging and more precise treatment leading to reduced subsequent procedures has been proposed (30). Safety is generally not a concern and it is typically well tolerated. Minor lacerations were reported in 2% of patients caused by a larger 25 mm balloon prior to its discontinuation (16,35). One benefit is that it does not require a contrast infusion like CLE with the thought that it is at least safe, if not safer, compared to other modalities

What is the role of VLE in BE patients?

A meta-analysis from Jain et al. suggested a high sensitivity (92.3%) and negative predictive value (83.3%) but a low specificity (23.8%) for VLE in BE patients for dysplasia. The significance of these findings however is limited by a low cohort size (36). The 1,000 patients multicenter study found that as an adjunct modality, dysplasia diagnosis increased by 3% and the dysplasia diagnostic yield improved by 55% over standard practice (18). However, it is not uncommon to reveal Barrett’s segments that lack layering or have atypical glands/ducts, but the biopsies do not show dysplasia (30). One study at Massachusetts General Hospital comparing VLE to pCLE showed the sensitivity and specificity of VLE for dysplasia detection at 86% and 88% respectively. A diagnostic accuracy of 87% was reported, significantly superior to that of pCLE (28). Another study found the sensitivity and specificity to be 90% and 93% respectively when using a computer related algorithm to automatically classify the images (37). Other studies with computer aided detection supported a high detection rate compared with manual reads (AUROC 0.95 vs. 0.81) (38). Future studies are needed to determine a negative predictive value which, if high, may support the use of VLE-target biopsies over the Seattle Protocol. An example of a VLE study is seen in Figure 2 (39).

What is the role of VLE for BE endotherapy?

In addition to surveillance, arguably the greatest clinical utility that VLE has is to guide treatment in BE with dysplasia. An accurate estimate of lesion size is important in determining resection approach. The rate of margin free resection in lesions of HGD dysplasia, IMC or early EAC has been estimated to be at about 50% under high definition WLE (40). VLE is able to identify mucosal lesions that are not seen under standard WLE. To increase the diagnostic precision, a laser guided device has been developed that marks the mucosal surface corresponding where both surface and subsurface abnormalities have been identified. One study compared incremental yield of dysplasia with VLE (24%) compared to Seattle protocol biopsies (19.6%) and random biopsies (5.7%), where VLE with laser marked targets had a reported incremental yield of 33.7%. The overall yield of dysplasia compared to the Seattle protocol was statistically higher (OR =2.1; P=0.03) (32,39). The multi-center study found that endoscopists using VLE felt that it helped guide tissue acquisition in 70% of procedures (18).

What is the role of VLE in BE for post treatment surveillance?

Endoscopic therapy is generally highly effective, but recurrence rates can be as high as 20% (41) and routine surveillance post therapy is recommended. VLE has been shown to be effective in 2 particular post treatment recurrences. One incidence being gastric cardia recurrence that is often not visible on endoscopy (31,42). The other incidence is detecting sub-squamous intestinal metaplasia, or buried BE. VLE has been reported in detecting post ablation buried BE with a reported sensitivity of 80% and specificity of 100% (43). However, another small study of 17 post treatment patients found that VLE detected 13 with sub-squamous glandular structures (SGS) concerning for metaplasia, but only one was histologically found to be BE (44). This is likely due to lack of specific VLE features distinguishing buried BE and SGS.

VLE appears to be a useful tool to assist in screening, surveillance, and therapy when used as an adjunct to current standard practice modalities including endoscopy with WLE and Seattle protocol biopsies. VLE has specifically been shown to be effective at increasing the dysplasia diagnostic yield in detecting lesions missed by WLE and random biopsies. In addition, it has shown promise in better detection of recurrence in often missed areas post treatment. As this technology is still relatively new, further studies are needed to support routine use of VLE. Barriers include limited number of large sample studies, cost and training demands, and the lack of clear evidence supporting superiority over current less expensive and readily available methods.