Glypican-1 exosomes: do they initiate a new era for early pancreatic cancer diagnosis?

According to the National and Comprehensive Cancer Network (NCCN), currently pancreatic cancer (PC) is the fourth leading cause of cancer-related death among US males and females (1). Peak incidence of PC is around the 7th–8th decade of life, and it has been linked to few predisposing factors including: cigarette smoking, obesity, red meat and heavy alcohol consumption along with chronic pancreatitis (1).

Because of its aggressive behavior and frequently late diagnosis, research aiming to early identification of PC or its precursors, could be crucial.

In a recent paper by Melo and associates, authors identified circulating glypican-1 (GPC1) exosomes as a peculiar hallmark of PC, useful also for identifying the early disease (2).

The aim of this commentary is to explore and highlight the Nature publishing authors’ findings, starting with a brief introduction focused on the research background.

Glypicans constitute a family of heparan sulfate proteoglycans (HSPGs) that are connected to the exocytoplasmic domain of the cell membrane by a glycosyl-phosphatidylinositol (GPI) anchor, and, to-date, several members of the glypican family, specifically six in mammals (GPC1–GPC6) and two in Drosophila, have been identified (3,4) (Table 1). 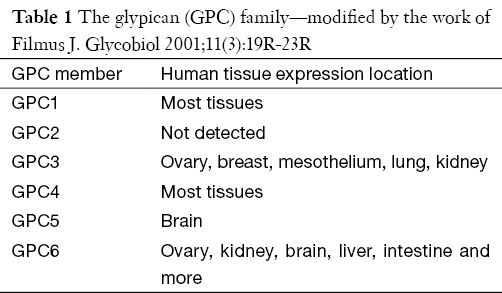 Reports connecting GPC1 associated to PC begin almost 15 years ago, when Kleeff and co-authors documented that GPC1 is over-expressed in human PC and in adjacent stroma fibroblasts, its antisense strikingly decreases the tumorigenicity of PC cells, and GPC1 itself plays an important role in the response to several mitogenic stimuli, such as HB-EGF (5,6) and FGF-2 (5-7).

Moreover, the same group later documented that in PC cells, GPC1 is required for an efficient TGF-β1 signaling (8). It was later shown that GPC1 down-regulation suppresses PC cell growth and slightly modifies signaling of members of the TGF-β family (9).

Literature reports a growing body of evidence suggesting that cancer cells release more EV than normal ones, partly in relation to the response of a number of oncogenes, including e.g., ras (2,13-16).

The term exosome was firstly used in 1981 to describe membrane-enclosed structures of 40 to 500–1,000 nm in diameter that had been ‘exfoliated’ from the surface of cultured cells (17). The same term was proposed in 1987 for 50–100 nm vesicles that form inside endosomes, and that are released in the extracellular compartment when endosomes fuse with the cellular membrane (18). Opposite, microvesicles are >1,000 nm and bud directly from plasma membrane (19).

EVs circulate in the blood, urine, ascites, and cerebrospinal fluid (20-23), also in cancer patients: indeed, circulating EVs have been detected in the blood samples of patients with glioblastoma, colorectal, ovarian and non-small cell (NSC) lung cancer (24-27).

Analysis of exosomes could be highly significant, since they contain proteins, nucleic acids (coding- and non-coding RNAs and DNAs), thus it can provide information on the primary tumor and along with its microenvironment (28-30).

The main functions of exosomes in cancer microenvironment are to promote cancer growth, to stimulate the angiogenesis, to activate stromal fibroblasts, to sculpture cancer extracellular matrix, to generate pre-metastatic niche and to suppress the host immune responses (31).

Their laboratory detection could be, however, challenging, mostly due to their small size that often involves several ultra-centrifugations cycles, in order to concentrate a large volume and amount of material. To address these technological challenges, a series of miniaturized systems have been developed to facilitate exosome analyses including micro-fluidic enrichment and magnetic detection (32). 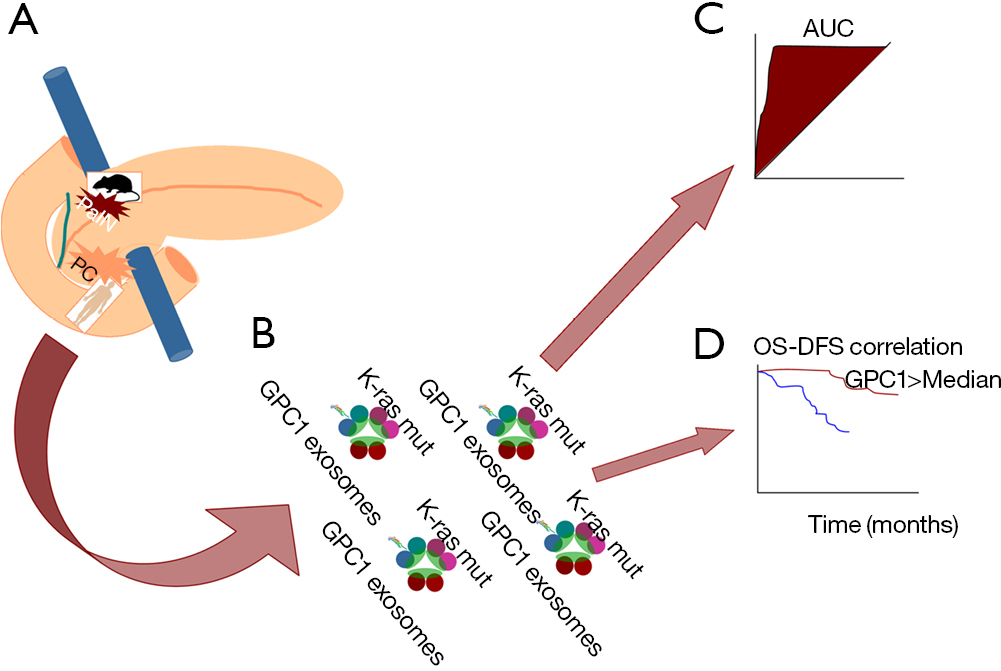 On the same extent, the main and innovative finding reported in this paper was the striking perfection of ROC curve analysis when analyzing the concentration of GPC1 exosomes for distinguishing cancer from benign diseases and cancer in situ from advantages stages in a clinical series of patients, as well as pre-malignant lesions (PanIN) from PC in a mice model (AUC 1.0).

Of note, neither the size nor the overall concentration of circulating exosomes were documented valid, and also Ca19.9 was proven inferior comparing GPC1 exosomes, suggesting these latter as a peculiar hallmark of PC, suitable also as candidates for early detection.

The primary application could be screening of PanIN patients, although human data should be advocated. It has been documented that K-ras are the driver mutations for PC and are detected in early PanIN-1, but it requires 15–20 years for this lesion to progress into metastatic PC (33-35), thus un-invasive monitoring of these patients could be extremely useful. Other translational uses could be the screening of circulating GPC1 exosomes in selected risk categories of patients, as alcoholics, obese, chronic pancreatitis or patients presenting a familial risk.

Another important clinical use could be the prediction of survival of PC patients, indeed Melo and associates, using a Cox multivariate regression analysis documented that the decrease of circulating GPC1 exosomes as an independent prognostic marker predictive for disease-specific survival. This result confirms previous finding by Duan and co-authors, who reported that GPC1 is significantly related to the perineural invasion in PC and it has an independent prognostic effect on the overall survivals (36).

Undoubtedly Melo findings should be confirmed in larger series of patients, but the striking laboratory evidences provided in this paper could open and promote (from bench to bed) a new prospective era for early PC detection.